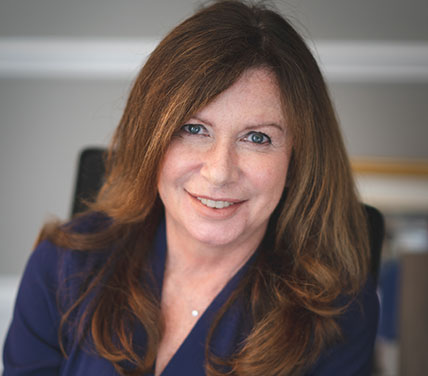 Karen Kominsky is a government affairs professional with more than 30 years of experience in both the public and private sectors. Karen served as Deputy Chief of Staff in the Office of the Governor, State of New Jersey, for Governor Richard J. Codey and Governor James E. McGreevey from December 2002 until January 2006. Her primary focus was managing legislative affairs for both governors. During her tenure, she guided the passage of many landmark pieces of legislation, such as automobile insurance reform, a stem-cell research initiative, the Highlands Protection Act and the NJ Domestic Partnership Law.

Prior to her appointment, Karen's career came full circle when she became Deputy Commissioner of the New Jersey Department of Environmental Protection, where she had originally launched her professional career.

Throughout her career, Karen has worked in leadership at lobbying and public affairs firms focused on the executive and legislative branches of government. In 2013, Karen was named by NJBIZ as one of "The Best 50 Women in Business". In 2003, she received the Women of Distinction Award for Public Service from the Delaware-Raritan Girl Scouts, and in 2005 was honored for Women's Leadership by PAM's List.

Karen has engaged in public service for several years with tremendous distinction. Her career includes appointments by former Governor Christie Whitman to serve as Acting Chair of the NJ Building Authority, and former Governor Donald DiFrancesco to serve on the State Planning Commission and the Garden State Preservation Trust. She also served on the New Jersey Real Estate Commission, having been appointed by Governor Codey in 2006. She served in New Jersey Superior Court as a court-appointed master in several Mt. Laurel affordable housing cases.

Always active in politics, Karen served as deputy vice-chair of the New Jersey State Democratic Party from 2001 to 2006, appointed by former State Chairman and former Speaker of the New Jersey Assembly Joe Roberts. In 1996, she was selected as a New Jersey representative for President Clinton to the Electoral College. In 2008, Karen served as the NJ State Director of the Hillary Clinton for President Campaign. Karen was a delegate to the Democratic National Convention in August 2008.

Karen was recently selected to serve on Governor-elect Phil Murphy's Transition Team in the area of Energy and the Environment. She was named as one of InsiderNJ's "Women on the Move" in November 2017. In 2016 she was named to Observer PolitickerNJ's "The 30 Most Influential Women in N.J. Politics".

A licensed professional planner, Karen is a graduate of Douglass College, Rutgers University and received her Masters of City and Regional Planning from the Bloustein School at Rutgers University. She was elected to the South Hunterdon Regional School Board in November, 2017.